Rocketing to success at Beacon Academy 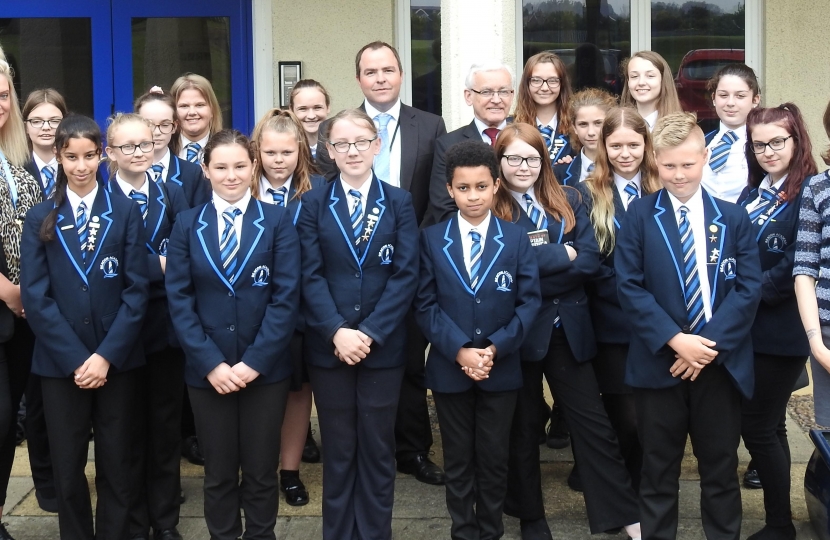 I was pleased to visit Beacon Academy to meet successful teams after impressive performances in nationwide competitions.

The national final of RAF-backed Race for the Line, in which students build and race rocket-powered cars, will feature two teams from the same school for the first time after both Beacon’s entries won places.

And its performing arts students will take part in the northern finals of the Global Rock Challenge after their eight-minute dance and drama piece was given’s the judges’ nod in the regional final.

In the Race for the Line regional final, held at RAF Waddington, polystyrene models, designed and made by the two Year 7 teams, travelled at speeds of around 80-miles-per-hour.

They came second and third with the top three going through to the national final at the Imperial War Museum Duxford, near Cambridge.

The third-placed team’s car reached 77.9mph while the second placed team’s model topped 86.1mph down the straight track. It was pipped to first place by just 0.4mph.

It was great to hear of the students' successes in such contrasting competitions. It shows a lot of commitment, dedication and talent to get as far as they have and I wish them all the best in their respective finals. I hope to return to celebrate a national win!

“I’m delighted our local MP has found the time to come in and recognise the students’ achievements. I am very proud of them.

“Out of 500 nationwide teams, we are the only school to have two teams qualify for the Race for the Line final.

“In the Global Rock Challenge entry, 70 students are involved, on and off stage. They and staff spend a lot of their own time making sure all goes well on the day.

“It just happens Grimsby Auditorium hosts the northern final as well as the regional one. They will compete against teams from Scotland and the north of England.

“We love giving our students these opportunities to excel. It develops them as people and gives them skills employers look for, such as communication and teamwork.

“The progress of Beacon students is in the top 10% nationally in the option group of subjects which includes both Engineering and Performing Arts.

“It’s good to engender that competitive spirit. Life is competitive and these opportunities being given by Beacon Academy instil confidence and ambition.”