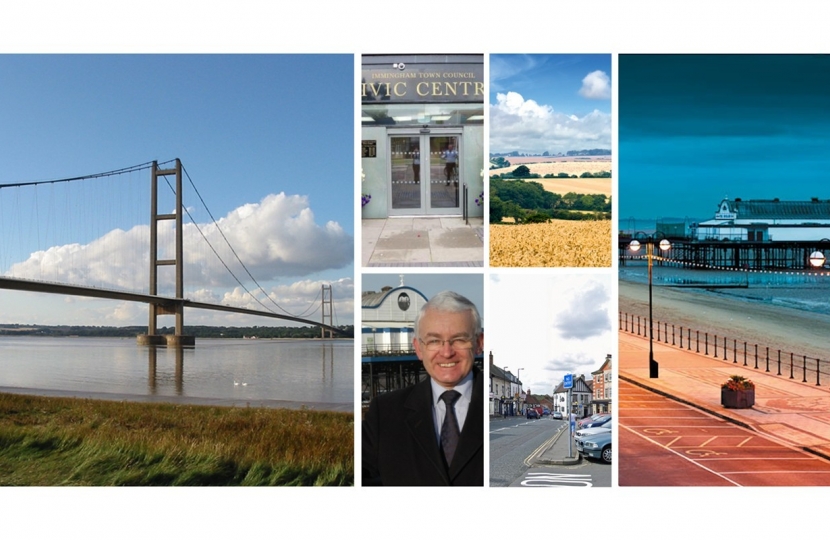 The Constituency takes its name from its largest town, but also includes Immingham and Barton along with many villages from Waltham to Ulceby. Such diversity makes the constituency rich with history and a sense of community.

The constituency is, of course, much more than Cleethorpes itself. Served by North, and North East Lincs Councils, it runs from the delightful market town of Barton-upon-Humber in the north through many villages in the Barton and Ferry wards of north Lincolnshire. Additionally, we have the major industrial centre of Immingham, which together with Grimsby has the largest dock complex in the United Kingdom when measured by tonnage. Although there is a historic rivalry between Cleethorpes and Grimsby, they are bound together by their connections with the sea. The Humber estuary itself is a site of special scientific interest, and there is also a beautiful hinterland taking in many of the villages on the edge of the Lincolnshire wolds-an area that has been designated an area of outstanding natural beauty.

Those of you local to Cleethorpes are know as Meggies, but it remains an ongoing argument as to where the name Meggie comes from. Some say that the top of Isaac's Hill used to be called Meg's Island, while others say a "meggie" was the cost of a tram fare from Grimsby to the resort. The term "Meggies" is used in Grimsby to refer to the town itself, as well as its inhabitants. Cleethorpes can also be known as "down beach". Locals refer to the beach as "the sands".

The sea front provides views of the shipping traffic entering and leaving the Humber for the ports of Grimsby, Immingham, Hull and Goole. The main shopping area is St Peter's Avenue (B1374).

Two large fortifications, the Humber Forts, are visible in the mouth of the river. On a clear day, the lighthouse situated on Spurn Point can be seen with the naked eye from the North Beach.

There is a Royal National Lifeboat Institution station, which is near the pier and next to the Coast Guard on Central Promenade. A new and larger RNLI station is planned. Cleethorpes Rescue also protects the beach.

Cleethorpes has a large boating lake featuring many varieties of ducks, swans and geese. To the south of the resort near Humberston is the yacht club.

Ross Castle, is a mock ruin of a castle built in 1863 by the Manchester, Sheffield and Lincolnshire Railway, and was named after Ernest Ross, secretary of the railway company. Its height was the highest point of the cliffs. After a period of closure, the castle was renovated, re-opening in June 2008 to the public. In 2007 the town was the Royal Horticultural Societies Britain in Bloom award winner in the coastal category. The town also received a Silver-Gilt award, a Tourism Award and Jeff Blanchard the Shredded Wheat Community Champions award.