My latest thought on Brexit 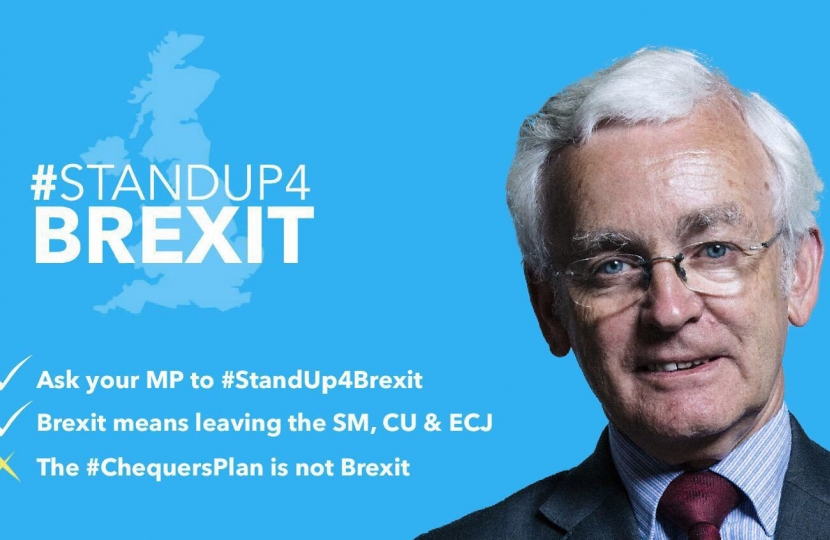 When the ‘Chequers Deal’ made it clear that we were heading for an agreement that was incompatible, with what, I believe, 70 per cent of my constituents voted for, and does not deliver on the manifesto commitments promised at last year’s election I decided I could not support it. Further concessions would inevitably follow, as indeed has been the case, and so now we have an even worse agreement.

Right from the start, both sides have tried to find a way of maintaining frictionless trade after Brexit, particularly across the Irish border, but, despite alternative proposals being put forward no alternative has been agreed.

The U.K.’s efforts have been primarily aimed at persuading the EU to undermine its own treaties; freedom of movement of goods & services, capital, information, and people is fundamental to the EU. These “four freedoms” were first established in the 1957 Treaty of Rome, and were later strengthened in subsequent treaties.

The U.K. has sought to achieve agreement on frictionless trade with the EU without being a member of the Single Market or the Customs Union. This would enable it to strike its own trade deals with other countries without suffering diminished access to EU markets, but the EU said that frictionless trade is a benefit of membership of the Single Market and Customs Union, and is therefore not available to non-members.

Remaining in the Single Market and Customs Union would mean accepting freedom of movement of people, respecting the primacy of EU law in matters of trade, and refraining from striking trade deals with third countries that would confer an unfair advantage over EU countries.

According to the Political Declaration, the U.K. still wants to end free movement of people, strike its own trade deals, control its own laws and wants to preserve its own Single Market – the Union of the four countries, England, Scotland, Wales and Northern Ireland.

All of the above highlights that our negotiating strategy has been wrong from the outset; instead of trying to stay close to the EU we should have made clear that we want to break free and take full advantage of the opportunities offered by Brexit.  Of course, we don’t want to lose existing markets in Europe but trading under World Trade Organisation rules is perfectly possible.

Sometime in the next few years, the backstop must end. It must be time-limited or allow the UK to exit unilaterally.

This is a bad deal that merely buys time.

As we have seen France and Spain are already making demands on Britain over fishing rights in British waters and the sovereignty of Gibraltar saying they will veto any future agreement until they get their way, this before the ink is dry on this deal.

If, like me you want to leave the EU this deal must be rejected. How then do we follow through? If they cannot get this Agreement through Parliament the Government will have to go back to the negotiating table. Whatever they say now the EU must accede to further talks – it’s in their interest as well as ours.

An orderly departure is preferable but what is referred to as a ‘no deal’ exit would not be a disaster.

Hopefully we will eventually come to a position that both those who support the agreement and those, like me, who oppose it can, though neither side will be entirely satisfied, coalesce.  I believe this could happen over coming weeks, though there will be more drama before we reach that point.