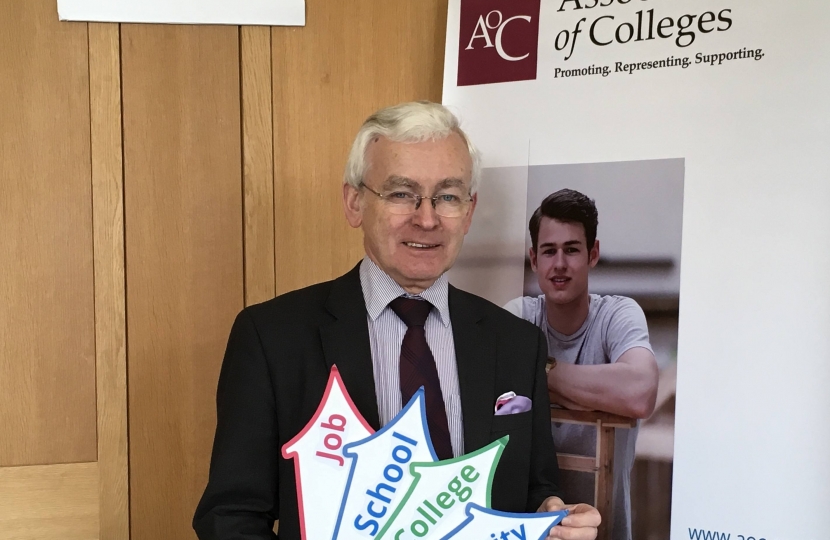 Cleethorpes MP, Martin Vickers, is supporting a Bill which seeks to ensure that school pupils are provided with high quality, impartial careers advice on all post-16 options available to them. The Ten Minute Rule Bill, called the ‘Careers Advice (Access to Schools) Bill’, requires schools in England to provide access to their premises and pupils to representatives from post-16 education establishments and others offering guidance on careers, training and courses. The Bill was presented in Parliament by Nic Dakin, the MP for Scunthorpe, on 28 February 2017 and is supported by the Association of Colleges (AoC).

David Hughes, Chief Executive of the Association of Colleges, said: “Young people need to be able to make informed choices about their future. It is imperative that they receive high-quality impartial careers advice when they are at school to inform them about all the post-16 options open to them, including apprenticeships and technical education and training. This will enable more young people to enter adult life with the confidence, learning skills and motivation to flourish.”

Here is Nic Dakin's introduction to the Bill:

I beg to move,

That leave be given to bring in a Bill to require schools in England to provide access to their premises and pupils to representatives from post-16 education establishments and others providing guidance on careers, training and courses; and for connected purposes.

Having a goal is hugely motivational, especially for young people, and access to impartial guidance about what opportunities are available, linked to labour market information, should be a given for all young people so that they can set their goals in an informed way.

When I stood down as principal of John Leggott College on being elected to the House in 2010, careers education, information, advice and guidance were not perfect in our schools and colleges, but they were a lot better than they are now. The deterioration of careers education over the last six years is deeply concerning. The CBI was right to state in its 2015 education and skills survey that careers guidance in schools was “not good enough”: more than three quarters of the businesses in the UK said that careers advice was not good enough to ensure that young people made informed decisions about their future career options. It therefore does not surprise me that, having seen the Bill listed on today’s Order Paper, a large number of individuals and organisations have contacted me to provide encouragement.

For a long while the Government were in denial about the impact that a plethora of changes, combined with significant funding cuts, was having on the provision of careers education in schools. To be fair, Ministers responsible for careers education—from the right hon. Member for South Holland and The Deepings (Mr Hayes) to the right hon. Member for Harlow (Robert Halfon), the Minister for Apprenticeships and Skills—did recognise the deficit, and I believe that they advanced the arguments within the Government just as employers and educationists, along with Her Majesty’s Opposition, advanced compelling arguments from outside the Government. However, for far too long there was no positive response from the Government. Then the penny dropped. The response was the establishment of the Careers & Enterprise Company, which I have always seen as an expensive and complicated way of fixing a fairly simple problem.

MyBigCareer is a charity that provides free advice in many disadvantaged areas of the UK. Volunteer career advisers from the independent sector and professions give up their time to go into schools and give free impartial advice on apprenticeships, university and work-related courses, and are overwhelmed by the response. They say that not one school with which they have worked has ever heard of the Careers & Enterprise Company, despite millions being ploughed into the organisation.

Back in 2012-13, when I led a commission on skills involving the Humber local enterprise partnership, businesses and schools were agreed on the need for better careers education, and were keen to work together to make it happen. However, it did not happen, because the pressures of the performance of the bottom line of results make organisations look inward rather than ​outward. What was missing was the capacity and time for businesses, schools and colleges to co-ordinate their efforts. That, in my opinion, is where the resources should be simply and ruthlessly targeted, and the need remains as strong today as it was then.

It is worth pausing to applaud the fantastic work that goes on in many schools, despite the pressures and funding challenges. Some amazing people with both business and education backgrounds are working to provide young people with impartial information and choice. Nevertheless, students should be entitled to quality careers education that meets an agreed standard, wherever they go to school.

The ambition of my Bill is not to transform the whole of careers education, information, advice and guidance so that all young people have a consistent entitlement to quality advice, wherever they go to school. Would that I could do that, but my Bill has a much more limited ambition. It seeks to ensure that, at the very least, colleges and post-16 providers can talk directly to school students about the opportunities that are available to them in their area. Sadly, too many schools, especially some with their own sixth forms, put obstacles in the way of students’ receiving this crucial information.

In response to a question from me, the Minister for Apprenticeships and Skills himself said:

“I recently visited degree apprentices at Gateshead College whose own school refused them a visit in order to talk about apprenticeships, skills and technical education.”—[Official Report, 6 February 2017; Vol. 621, c. 13.]

He was rightly outraged by that, but it is not an isolated case. Colleges all over the country report the placing of similar barriers in school students’ way. That just is not good enough. Even in my own area, where the situation is generally good, the two excellent local colleges, North Lindsey and John Leggott, report that things are becoming more difficult than they used to be. When I met students and staff at North Lindsey, staff reported that school student access was becoming more difficult, and that was confirmed by the students’ experience. John Leggott reports instances in which students have been denied access to careers events because their schools chose not to participate. The pressure on schools to deliver results sometimes leads to an understandable reluctance to provide time for careers education that could otherwise be spent on mainstream studies, but I would argue that once young people have a personal goal, often linked to where they progress to next or a career target, it can motivate them to achieve much more, thereby transforming their performance in their academic studies.

As a result of its inquiry into careers education in July 2016, the Sub-Committee on Education, Skills and the Economy found that too many young people were leaving education without having had a chance fully to consider their future options, or how their skills and experiences would accord with opportunities in the jobs market. It also judged that a host of policy changes, initiatives and new bodies introduced in recent years had failed to make serious improvements, and had even been counterproductive in some cases. It welcomed the Government’s intention to legislate, and recommended that they set out robust mechanisms to ensure that the new law was well publicised and properly enforced.​
In their response, the Government said that they were determined to tackle the patchy state of careers provision, and to raise its importance and profile in schools. They said that new legislation should be publicised and properly enforced, and made a commitment to update existing careers statutory guidance to ensure that schools were clear about what they needed to do to comply with any new legal requirements before they came into force. The Government made clear their intention to

“publish a comprehensive careers strategy for all ages”.

“we need to do more to empower students, parents and employers to make confident and informed choices about their education and careers options, whether they are in schools, technical education or higher education.”

The previous Secretary of State, the right hon. Member for Loughborough (Nicky Morgan), had plans for legislation requiring schools to allow other providers of education and training to talk to their pupils about opportunities post-16. That was scheduled to be included in the now defunct education for all Bill. A statement at the time said that schools would

“be required by law to collaborate with colleges, university technical colleges and other training providers”.

That seemed to have been shelved. However, there does now appear to be a chink of light at the end of a very long tunnel. Last week, Lord Baker proposed an amendment to the Technical and Further Education Bill that the Government accepted. It says that schools must ensure that there is an opportunity for a range of education and training providers to access pupils to inform them about technical education qualifications or apprenticeships.

That is a positive move, but the Government can seize the opportunity of my Bill to go that bit further, in line with their earlier intention and ambition. My Bill will ensure that school pupils have access to information from the providers of post-16 pathways locally direct to them. It will require schools in England to provide access to their premises and pupils for post-16 education establishments and other providers. That would significantly improve the quality of information available to young people when they make decisions about their future. As such it would be a great step forward.

Schools cannot deliver professional and independent careers advice and guidance on their own. They are not best placed to talk about the benefits of career pathways, courses post-16, technical and professional education or apprenticeships: colleges and training providers are. Colleges recognise the critical nature of good careers education and are keen to work with their local schools. These changes to access need to happen; they can no longer be swept under the carpet. We owe every young person this entitlement to information, so that they can achieve their potential and find the best routes into the ​right career. What will benefit our young people will benefit our businesses and economy. It will benefit us all.

Question put and agreed to.

Bill read the First time; to be read a Second time on Friday 24 March, and to be printed (Bill 148).

About the Association of Colleges (AoC) – www.aoc.co.uk

AoC’s membership includes 308 colleges in England, including general further education, sixth form, tertiary and land-based colleges. It supports, represents and promotes the interests of its member colleges, as well as the rest of the FE sector.