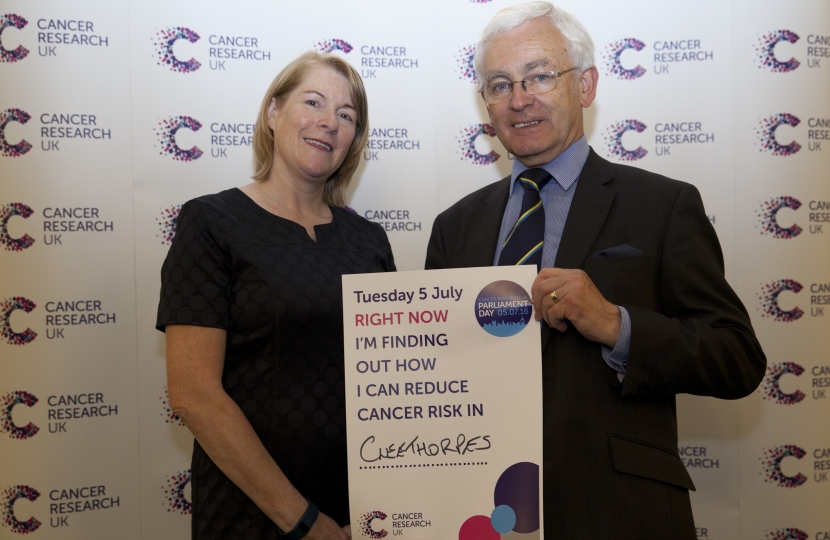 He joined campaigners in Westminster in July (Tuesday 5 July) to find out more about the ‘Junk Free TV’ campaign, which aims to help tackle children’s obesity.

In Yorkshire and the Humber more than one in five (21.5%) children are overweight or obese*, and people who are obese as children are more likely to be obese as adults which increases their risk of developing cancer.

While such ads have already been removed during children’s TV shows, young viewers are regularly exposed to alluring marketing during other programming, such as family entertainment.

The launch of the campaign is accompanied by a report** featuring interviews with eight-12 year olds. It illustrates the persuasive impact of TV junk food advertising on youngsters.

Of one particular advert, a child said: “It makes you feel as if you’re happy and excited, and it feels like you want to try it because the guy’s dancing in it because he’s eaten it and it tastes good.”

Another child said they wanted to “lick the screen”, while others said they had “begged” and “pestered” their parents to buy junk food they’d enjoyed watching the adverts for.

Martin said: “With stark levels of childhood obesity in our local area and across the UK, it’s clear we need to act now to help give children the best chance of a healthy future.

“Obese children are more likely to be obese as adults, so it’s vital that young people are encouraged to eat healthily and keep active and that healthy choices are easy to make.

“I wholeheartedly support Cancer Research UK’s efforts to reduce the insidious influence of TV junk food advertising on children’s lives. I will also continue to press for improved local services in support of those suffering from all forms of cancer. ”

Obesity is the biggest preventable cause of cancer after smoking and is linked to ten different types including two of the most common cancers, breast and bowel and two of the hardest to treat, oesophageal and pancreatic.

Cancer Research UK is campaigning for a comprehensive childhood obesity strategy from Government to help protect children and save more lives in the future.

As well as calling for the removal of junk food advertising on TV before the 9pm watershed, the charity wants to see the promised tax on sugary drinks brought into effect and the introduction of Government-led targets for reducing the amount of fat and sugar in food.

Alison Cox, Cancer Research UK’s Director of Cancer Prevention, said: “Junk food is everywhere. Children are bombarded by advertising tailored to tempt them with pretty colours and cartoons which all influence the food they prefer. We need stronger action to help our children have healthier diets, and eat fewer unhealthy foods packed with extra calories.’

“Being overweight and obese is a major cause of preventable illness and death in the UK, costing the NHS billions of pounds each year. We owe it to future generations to reduce the devastating impact caused by the obesity epidemic and help save more lives.”

To support the campaign, visit cruk.org/junkfreetv.

Please see the attached document below for more information on reducing cancer risk in Cleethorpes.