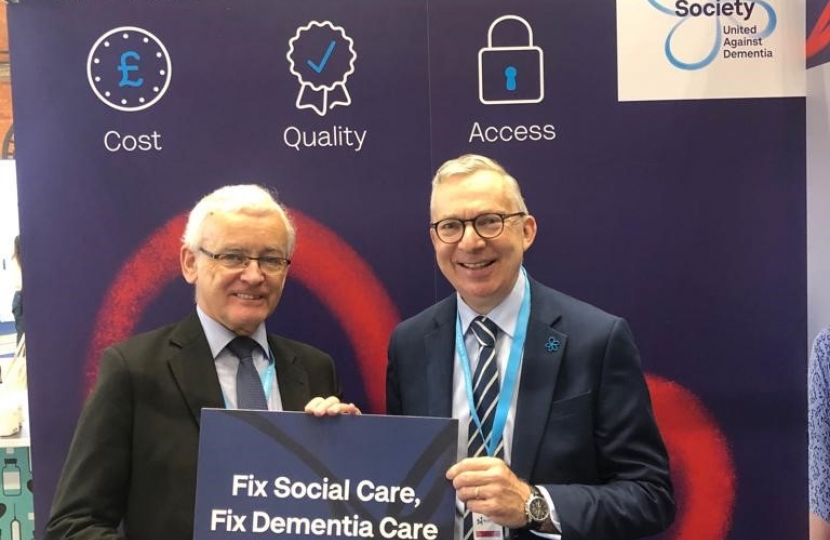 At Conservative Party Conference, Martin joined other Conservative Members of Parliament, Councillors, and Party Members and backed Alzheimer’s Society’s campaign to put dementia at the heart of social care reform.

The campaign calls for care reform that ensures people affected by dementia can access good quality care. This care would be funded like other public services where the cost is spread across society, so individuals aren’t left alone with the devastating cost of specialist dementia care.

There is wide public backing for the Government to Fix Dementia Care, and in 2019 Alzheimer's Society's campaign has been supported by more than 100,000 people and over 200 cross party Members of Parliament.

Alzheimer’s Society believes the Government can best deliver for people with dementia by committing to universal care, free at the point of use, including the cost of specialist dementia care. This has the potential to eliminate the risk of people selling their homes to pay for care and deliver dignity and security for people living with dementia.

Martin said: ‘I am proud to offer my support to people affected by dementia and make the case for urgent social care reform in the upcoming Queen’s Speech. One million people will have dementia by 2021 and it is vital that they are able to access the care they need and deserve without facing devastating costs.’

Sally Copley, Director of Policy, Campaigns & Partnerships at Alzheimer’s Society said: “It is fantastic to see our elected representatives from national and local government coming together to champion the voices of people with dementia and call for reform. We urge the Government to act now and provide the social care reform that people affected by dementia are crying out for.”

Alzheimer’s Society is here for anyone affected by dementia. For information and support, call the National Dementia Helpline on 0300 222 1122 or visit alzheimers.org.uk.

It was a pleasure to visit CATCH last week with Lia Nici MP. We discussed the interests of CATCH members, the future of Local Enterprise Partnerships (LEPs), devolution, skills and training.