Boris Johnson delivers on the will of the people 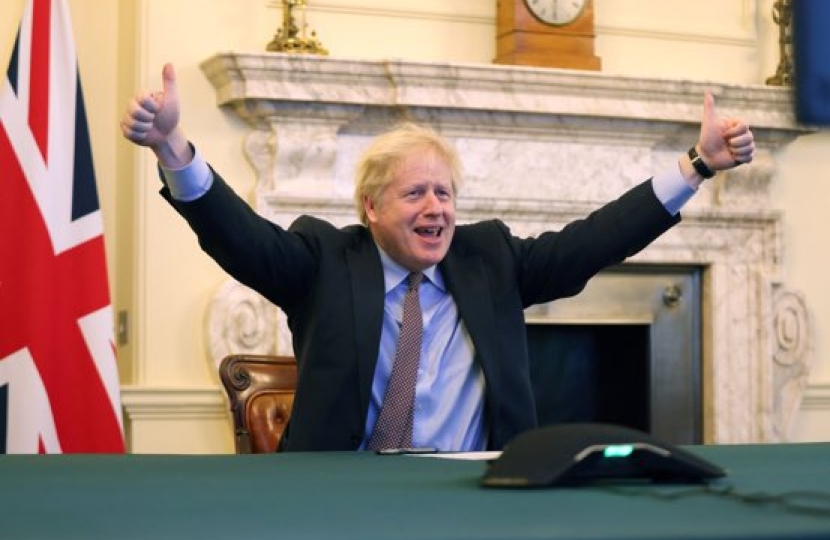 As someone who voted to leave the EU in 2016 and also voted to leave the Common Market in 1975, I warmly welcome the announcement of a Brexit deal which comes as an excellent early Christmas present and a positive end to an otherwise unusual and somewhat disappointing year.

Boris Johnson and his negotiating team have secured unprecedented access to the European market that will allow the UK to continue trading freely with the EU, while fulfilling the referendum pledges to take back control of our money, laws and borders. Crucially, there will be no role for the European Court of Justice and the UK will no longer be subject to EU law.

Of course, there will be those that will criticise the deal, come what may. However, as a Eurosceptic since the 1970s, I am convinced that this deal is in the UK’s interests. It is important to remember how far we have come in the journey. Few seriously believed that Vote Leave would win the referendum, but we did. We then faced 4 years fighting against the establishment who were determined to overturn the will of the people. Under the leadership of Theresa May certain key red lines were set, such as leaving the Single Market - something that was far from certain at the time.

Unfortunately, Mrs May’s deal had some less than satisfactory elements which I am delighted to see have now been removed. Boris Johnson understands and believes in Brexit which meant that his approach to the negotiations was far more likely to succeed. Since coming to power in 2019, he has gone above and beyond to defend UK interests and deliver for his country. Gone is the “common rulebook” based on EU regulations, dynamic alignment with EU laws and ECJ oversight, all of which were completely unacceptable to those who supported leaving the EU. In their place, Boris Johnson has ensured that we will have competitive regulatory divergence allowing the Government to make the best decisions for the UK in future. Furthermore, at the end of the transition period, the UK will be outside both the Single Market and Customs Union and will benefit from zero tariffs and zero quotas. We will once again have the sovereign right to diverge and become more competitive on the global stage.

As a community an important part of our heritage is fishing; it has always been clear that this would be an important issue to the people of Grimsby and Cleethorpes and I know many will wonder how the deal will impact this industry. The negotiation in this area was very tough with robust arguments put forward by a number of European players. However, this deal allows the UK to regain control of its waters after a short period of transition. This is a sensible compromise. At this time, we do not have the catching capacity and we need time to build up our fleet so that we are in the strongest possible position when we take back full control of our waters.

While my own enthusiasm for Brexit and confidence in our future as a sovereign, free trading nation are beyond doubt, I appreciate that some have been less optimistic. I want to reassure those people that this pessimism is misplaced. Throughout the course of the last year, the UK has been proven to be a valued trading partner to the rest of the world. The International Trade Secretary, Liz Truss, has miraculously negotiated 61 trade agreements since we formally left the EU on 31st January. Far from the little Englanders the remainers have always made Brexiteers out to be, we are pursuing a vision of a truly Global Britain.

It's important to remember that one of the big advantages of Brexit is the ability for the UK to negotiate its own trade deals; in other words trade deals are better than the absence of deals.

I welcome the deal and, subject to close examination, will support it when Parliament is recalled in the coming days. There should be no mistake; this is Boris Johnson’s deal. Defying the odds once again, he has achieved what his critics claimed was impossible and delivered for Britain in record time. We can look forward to a very bright future indeed.