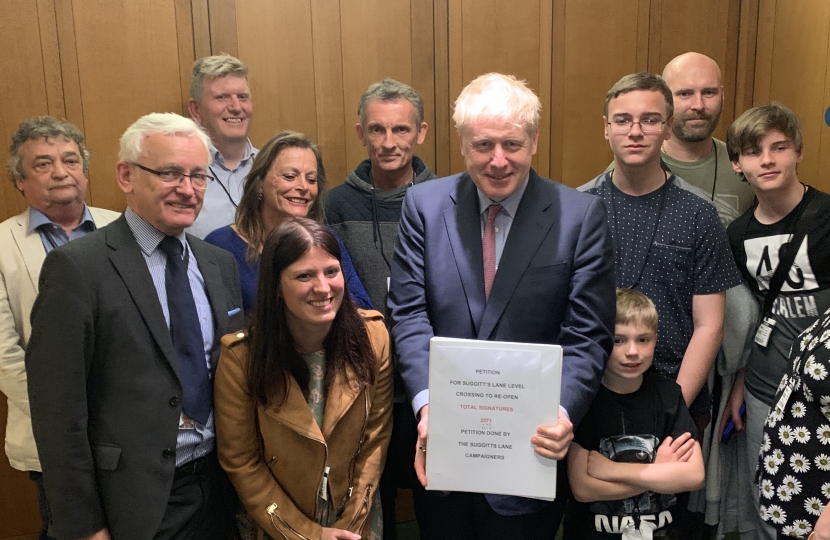 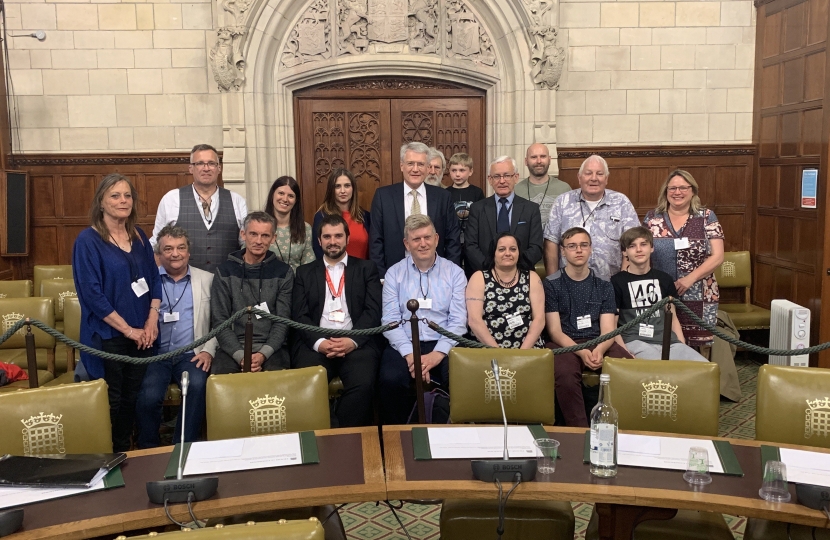 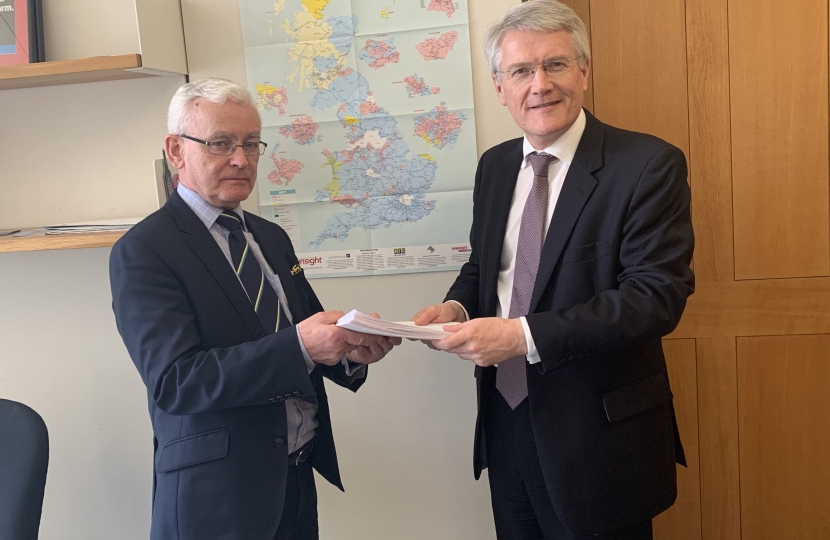 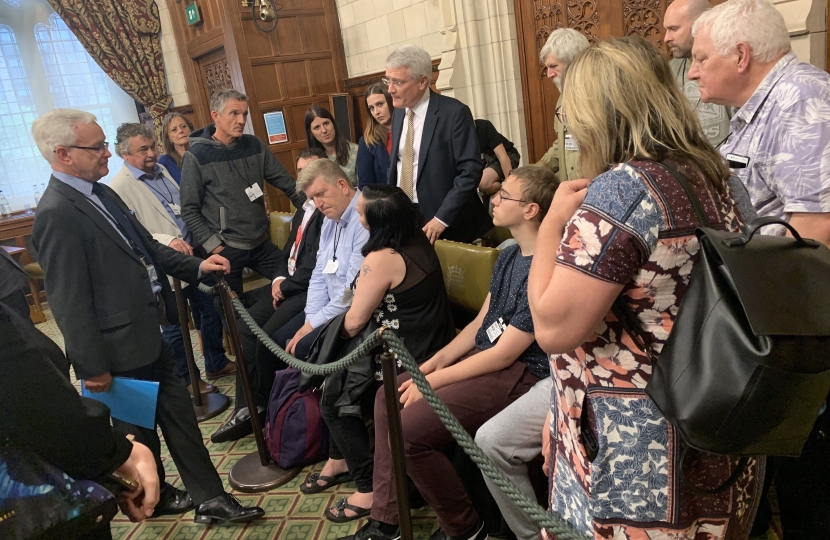 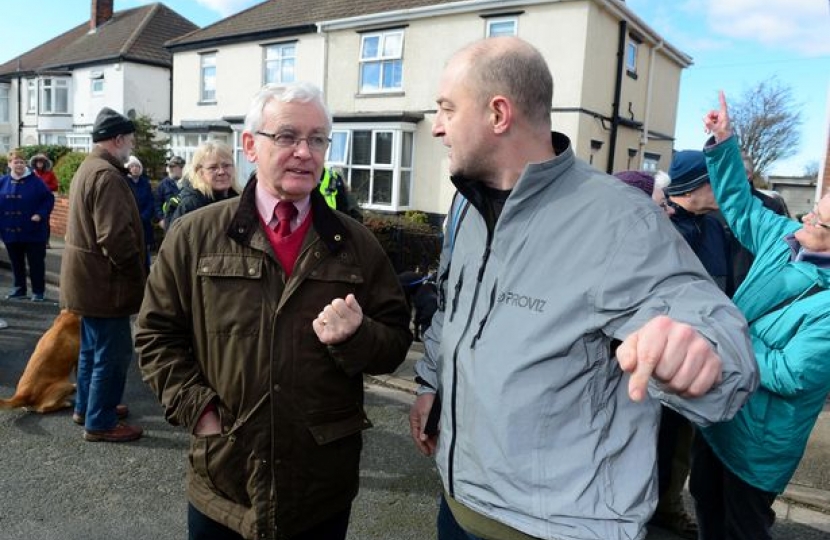 I am completely opposed to Network Rail's decision to close Suggitt's Lane level crossing. I have made this clear to Network Rail representatives both in person and in written correspondence but it is clear that they are determined to push ahead.

There is evidently strong opposition to this plan locally, from me, residents and the Council, yet Network Rail have ignored us at every stage.

I have raised the matter in the House of Commons several times and have secured the support of the Rail Minister who has urgently asked Network Rail to review their decision.

Together with the Rail Minister, I met representatives of Network Rail on Monday 8th April to further make the case.

On Wednesday 3rd April, I presented the Minister with a petition, signed by 4,000 local residents who are opposed to the closure and on Monday 8th April I presented that petition to the House of Commons.

Owing to Covid-19, it has been some time since I have been able to give an update. I want to assure local residents that my resolve to seek a solution to the level crossing issue has not been dented and that I continue to engage with Network Rail, the local Council and the Government to reach a solution.

As we know, Suggitt’s Lane level crossing will not be reopening. The legal position is that Network Rail have the final say and they have refused every request - including one from the Prime Minister - to reconsider this as they insist there are safety concerns and that they would be legally responsible if there were an accident.

However, following the Prime Minister’s intervention, Network Rail have been in discussions with North East Lincolnshire Council about providing a footbridge with disabled access at Suggitt’s Lane. The Council has agreed with Network Rail that if they provide a new bridge the Council will take on responsibility for service and maintenance costs.

The Council and Network Rail are currently involved in making the necessary legal arrangements after which a planning application will be considered.

At the Prime Minister’s request the Transport Secretary is taking a personal interest in Suggitt’s Lane and is monitoring progress. He will intervene as necessary.

Please rest assured that I will not let this rest and will continue to do all I can to ensure a satisfactory result.

Thanks to the Prime Minister's two interventions, I have had three meetings at Downing Street with senior officials. There is a clear will to resolve this issue. However, the problem is a legal one and inevitably different lawyers have different views.

I will continue to work with Downing Street until a solution is found. If a new bridge over the old level crossing is the only option, it must be built quickly and must include disabled access. I continue to argue that simply reopening the crossing would be the best outcome.

Today the Prime Minister visited Grimsby for an early morning tour of the Fish Market. After the tour, I was able to update him on the progress with Suggitt's Lane and he reaffirmed his commitment to reaching a resolution. In an interview with the Grimsby Telegraph later that day, Mr Johnson again committed to getting it done.

Today I had the opportunity to ask the Prime Minister a question at PMQs. He reassured me that "Suggitt's Lane is never far from [his] thoughts" and renewed his commitment, as well as that of the Department of Transport, to reach a solution as soon as possible.

Today, I met the new Rail Minister, Chris Heaton-Harris, to discuss the crossing which remains out of service following Network Rail’s decision to permanently close it without consultation.

I made the case for an immediate reopening of the crossing, perhaps with additional safety measures in place, followed by a consultation with the local community to find a more permanent solution that meets Networks Rail’s safety criteria. I also stressed the need for a solution that does not lead to an unnecessary cost for the taxpayer.

The Rail Minister committed to discuss the matter personally with Network Rail in order to reach a solution.

Today I wrote to the new Leader of the Conservative Party, Boris Johnson, to congratulate him and remind him of his pledge to do all he can to reopen the level crossing if he was fortunate enough to win the leadership contest. Tomorrow, Mr Johnson will take office as Prime Minister and once he appoints his cabinet, I will write to the new Secretary of State for Transport as well as the Rail Minister to further make the case.

An action packed day today as a coach-load of campaigners from Cleethorpes descended upon Parliament to witness my Westminster Hall debate on Suggitt's Lane level crossing. I questioned the actions of Network Rail and implored the Rail Minister to take action.

The debate was followed by a meeting with the Rail Minister where residents were able to strongly put forward their case for saving the crossing.

Finally, I arranged a meeting between the group and Boris Johnson who considered Network Rail's actions to be 'an outrage' and pledged to do all he can to support the reopening of the crossing if he becomes Prime Minister. 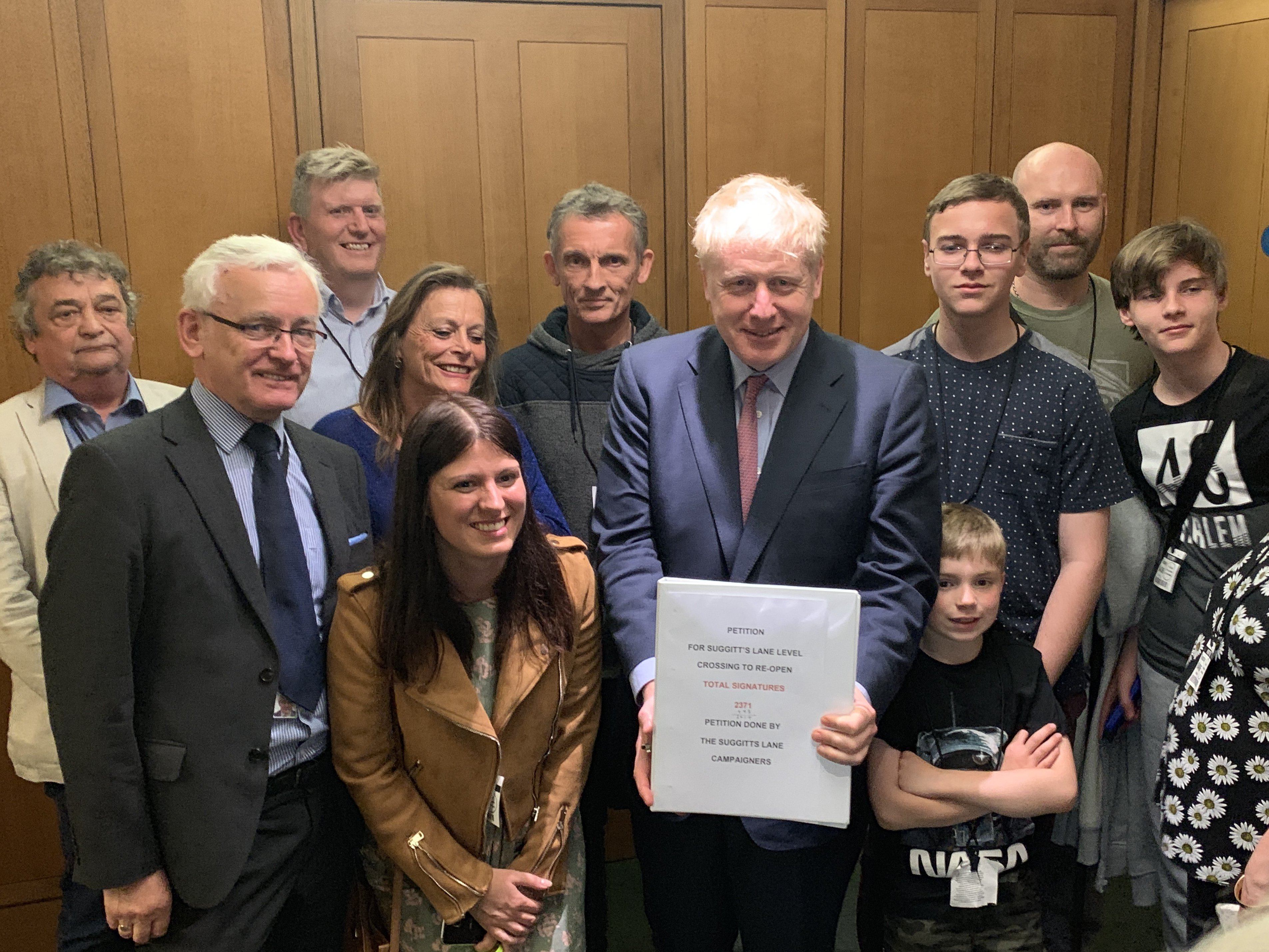 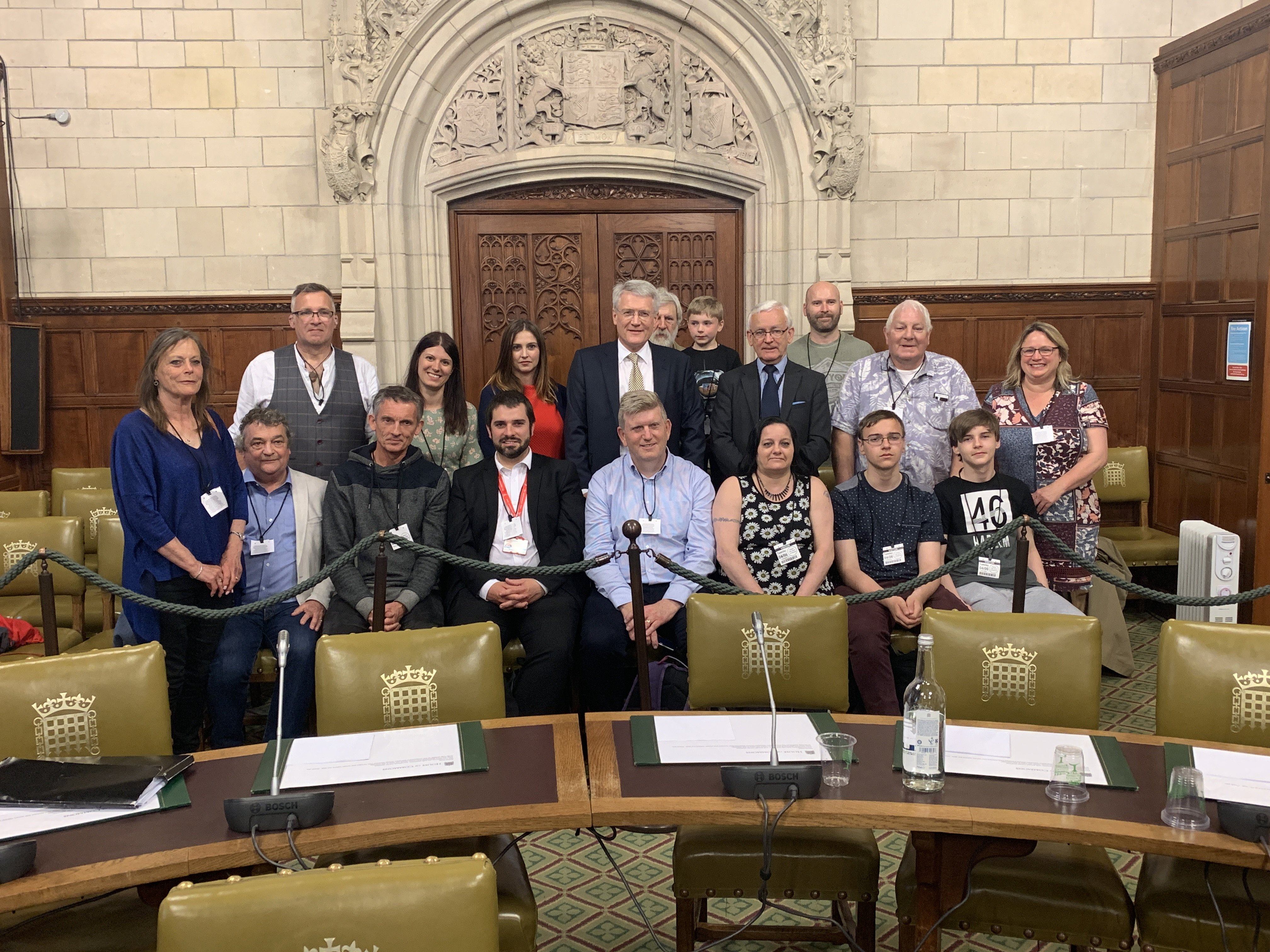 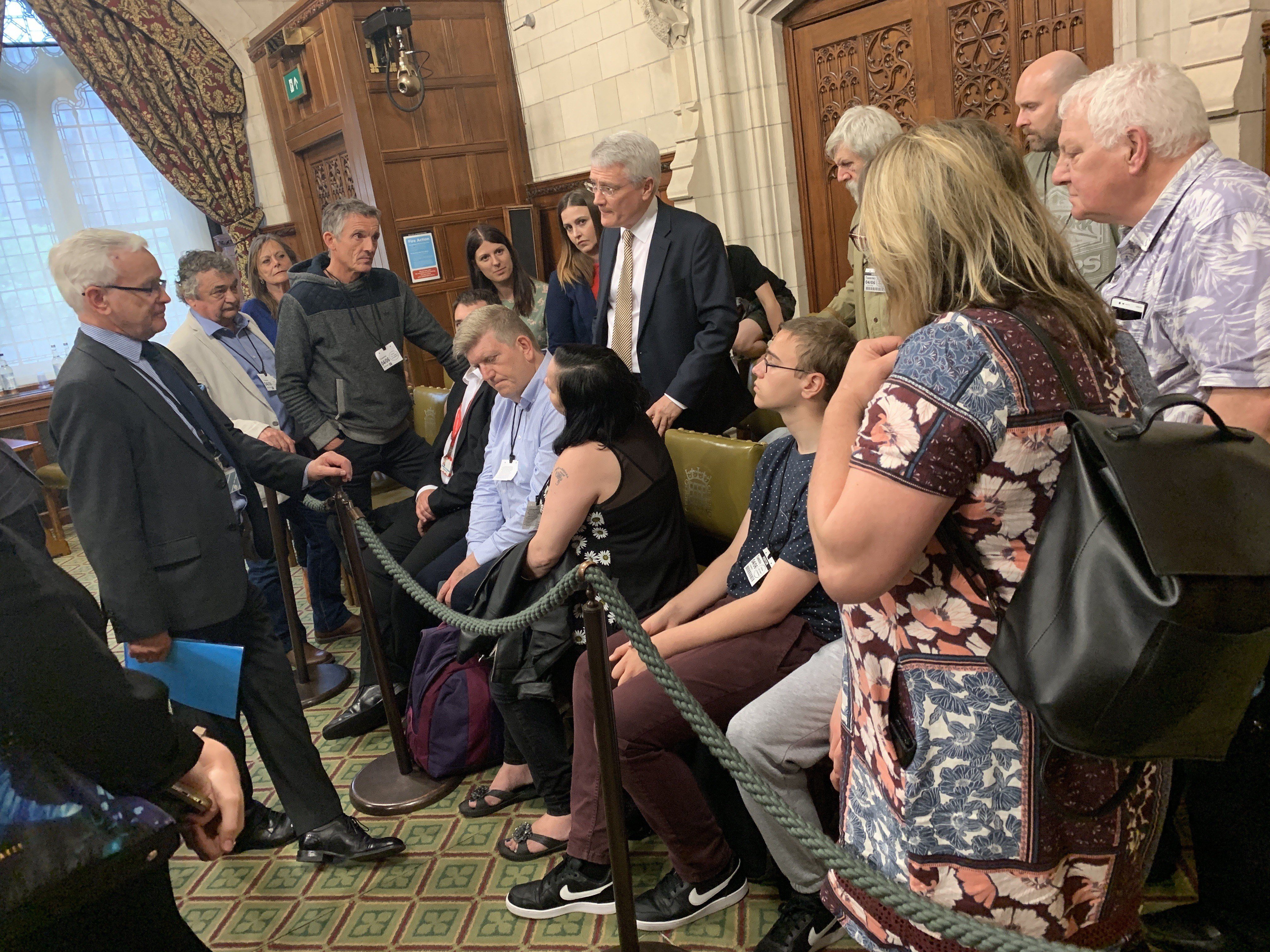 Rail Minister's response to the petition:

"The UK has one of the safest railways in Europe, but this Government strives to ensure that safety continues to be improved.  Level crossings remain one of the most significant risks to public safety on the railway network and it is therefore right that, where justified and practicable, they are closed to eliminate this risk.  However, this should not be at the expense of local community access to both sides of the railway.

I am well aware of the complex issues surrounding Suggitt’s Lane level crossing and the depth of feeling in the local community.  Whilst it remains the responsibility of Network Rail, as the infrastructure manager for the railway, to take the decision on whether to close the private crossing, I have urged it to arrange a meeting at the earliest opportunity between all parties that have an interest in Suggitt’s Lane.  I have made clear that this meeting should include North East Lincolnshire Council, local residents’ representatives and, of course, Network Rail itself. This should provide an opportunity for the concerns of the local community to be considered. I hope that this meeting will enable all parties to agree a solution that addresses both the safety and accessibility issues relating to Suggitt’s Lane."

Today I met Andrew Haines, CEO of Network Rail. I pressed him on the situation regarding Suggitt's Lane level crossing and argued that at the very least the crossing should be re-opened whilst a review takes place. He promised me that he will personally look into the issue.

Yesterday I had a constructive meeting with four representatives of Network Rail, the Rail Minister, Andrew Jones, and an official from the Department for Transport to discuss the closure of Suggitt's Lane level crossing.

The Minister and I put forward a range of alternative safety measures to protect users and provide continuous access to the foreshore and North promenade. We also pointed out that the alternative route took people over very busy roads which may present a greater risk.

It was noted that NR and North East Lincolnshire Council are the principle landowners and it was agreed that a meeting between NELC, NR and representatives of the local community should take place urgently. I asked NR to consider reopening the gates while negotiations take place and they agreed to look into the matter.

Today I handed over to the Rail Minister, Andrew Jones MP, a petition signed by over 4,000 local residents objecting to the closure of Suggitt's Lane level crossing by Network Rail. Thank you to DN35 Crime Watch for all of their efforts in collecting signatures.

I also raised the matter in the House of Commons, this time as a Point of Order, to ask the Speaker how best to proceed.

I strongly object to plans to close Suggitt's Lane crossing and joined protesters on Saturday to oppose the ludicrous idea.

I have met with Network Rail and pointed out to them some of the inaccuracies that they had made in their original letter to me and I have stressed the inconvenience that this will cause to many residents.

There are no alternatives to this crossing and people should not be expected to walk to Fuller Street Bridge and then back on themselves to access this area.

I met with the Rail Minister earlier this week and I am hoping that he will be able to use his influence, but the decision lies with Network Rail.

They need to be looking at other safety measures that can be used, such as installing warning lights or interlocking gates.

Bringing the speed of the trains down to 20mph would also be measure that could be used.

Interventions in the Commons

I have raised this matter in the House of Commons on multiple occasions. You can watch my interventions by following the links below.

We must change the law so we can hold Network Rail to account, Thursday 13th June  https://www.youtube.com/watch?v=EnqHS_6E924

The Leader of the House, Thursday 4th April  https://www.youtube.com/watch?v=bh93rsaSpjA&feature=

Rail Minister will do “all he can to help”, Thursday 21st March https://www.youtube.com/watch?v=aHV6q64okYs